Few regions on earth have the remarkable combinations of cultures that you find on a southern Italy road trip from Naples to Sicily. This is not hyperbole. At 47, Italy actually does have the greatest number of UNESCO World Heritage sites. So where else would a die-hard culture vulture and history lover go but on a 2-week drive from Naples to Palermo, the capital of Sicily?

I hope this 1,300-mile southern Italy road trip will inspire you to visit these sites and absorb the history that has gone into making the south of Italy what it is today. While you’re at it, absorb the pasta and wine too! 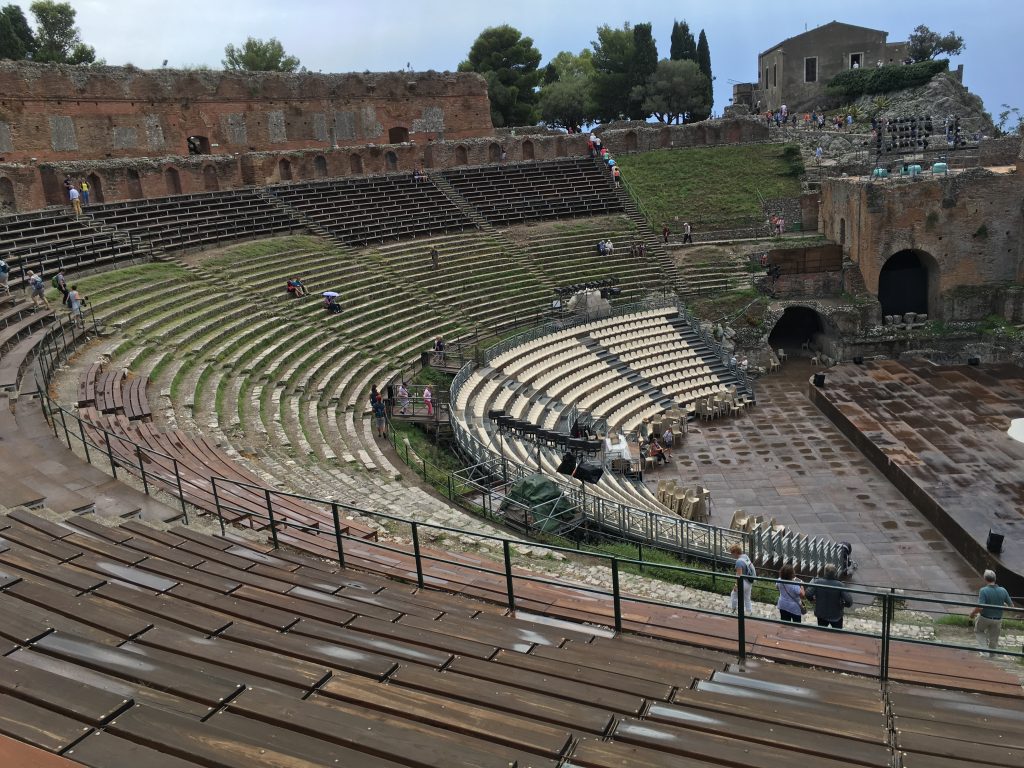 Before taking off on your epic road trip, be sure to make time to explore the Amalfi Coast and particularly Capri, the magical isle. Or, combine your trip to include the ultimate Puglia road trip.

Southern Italy has reasonably good rail service, but your best bet, if you’re driving from Naples to Sicily, is to rent a car in order to navigate the narrow streets of some ancient towns and to visit archaeological sites that may be far from the cities. Check out these useful tips for driving in Italy. 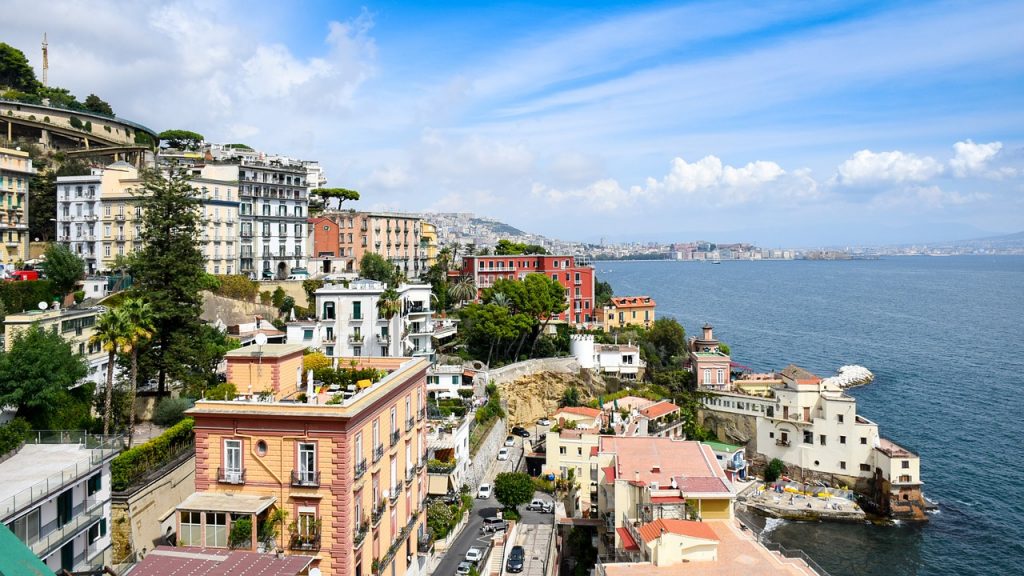 Napoli’s art world has had a love-hate relationship with this collection for years. First, it was banned for centuries.  Later the collection was offered only to “respectable” adult men who could afford the exorbitant entrance fee. Then it was banned again. Finally, it crossed into the realm of fine art and achieved its current status as an intriguing archeological collection. But even today, kids need to be accompanied by an adult in order to see the exhibit.

And then there is pizza, another big draw in this wonderfully chaotic city. The city certainly lives up to its nickname, the capital of pizza. Pizza is practically a religion in Naples…and with good reason. The varieties are legend including some of the largest varieties of vegetarian pizza known to man.

The Amalfi coast is about cuisine, culture, history and all good things. Check out the best places to visit in this magical coast.

Where to stay in Naples, Italy.

On to Matera on this Naples to Sicily road trip. Matera is a wild, mystical dream. If Salvador Dali and Hieronymus Bosch collaborated in creating a city, Matera would be it. It’s as if the word “otherworldly” was created just so it could describe Matera. The town was carved straight out of the surrounding mountains. As such it is known as “la Città Sotterranea” (the Subterranean City) and is a UNESCO World Heritage Site.

It is so surreal that and unique many movies have been filmed there including Mel Gibson’s The Passion of the Christ, The Omen and the most recent Ben Hur.#Matera is an otherworldly #UNESCO World Heritage site and the perfect stop on your southern Italy road trip. #southernItalyroadtrip Click To Tweet

The best restaurants in Matera are underground or in caves. So are many homes, stores, and churches.  My favorite underground establishment is the underground museum. I felt sorry for these unusual works of art existing as they do in the darkness, never seeing the light of day. Wandering the tunnels witnessing the surprising exhibits is truly a unique experience.

At the very tip of the Italian boot in Reggio Calabria is the town of Villa San Giovanni. Here is where you take the ferry to Messina in Sicily. Crossing from mainland Italy to the island of Sicily on a car ferry is, shall we say…interesting and perhaps the most challenging aspect of this road trip in the south of Italy.

The car ferry takes 30 minutes and costs about €35. The crossing itself is smooth sailing. The challenge is navigating the car onto the ferry with its narrow paths and sharp turns. One more reason to make sure you rent a small and maneuverable car as you possibly can. Here’s a good site for finding car rental companies.

Sicily has been at the crossroads of the Mediterranean for millennia. Many cultures have added their thumbprint to this island either through conquest or colonization. These include; Phoenicians, Greeks, Romans, Vandals, Arabs, Normans, Spanish, and others. The influence these cultures have left in Sicily is evident, particularly in the electric architectural styles.

Many of the most remarkable structures; churches, palaces, boast a mixture of Byzantine, Arabesque, Norman and Gothic influences, a combination that is unique to Sicily.

Heading south upon entering Sicily, one of the first cities you encounter is Taormina with its imposing Greek Amphitheater built in the 3rd century BCE. 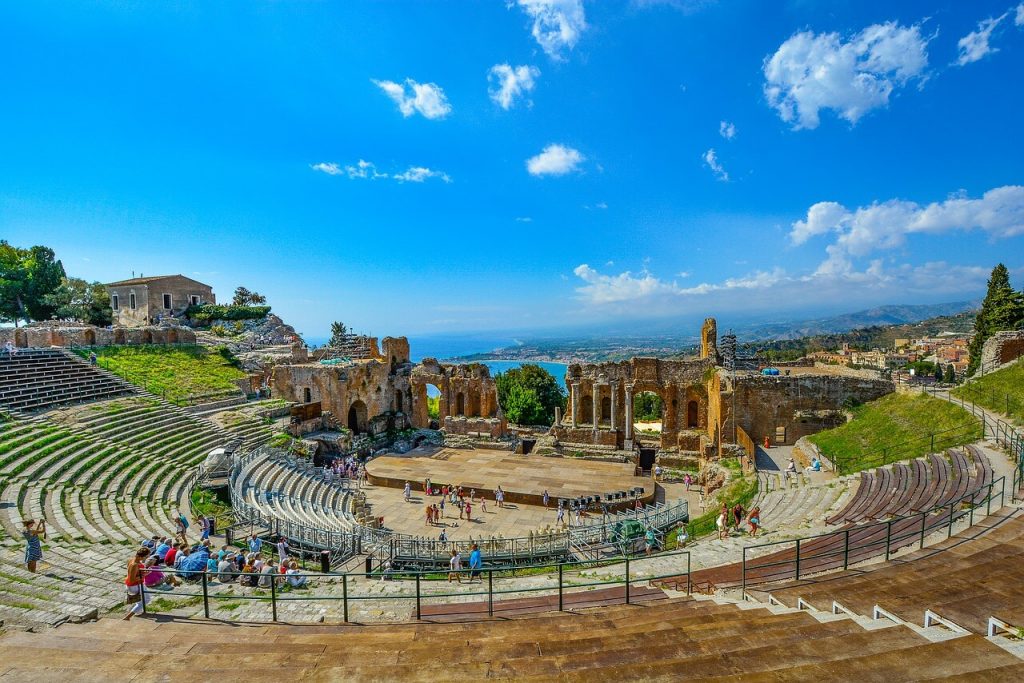 It is still used today for performances. Taormina is an ancient city with a rich heritage. The main pedestrian street, Corso Umberto, winds through a well-preserved collection of medieval buildings. People-watching in a cafe on Corso Umberto is a must-do activity in Taormina.

Where to stay in Taormina.

Continuing south from Taormina you will find Siracusa (Syracuse) with its impressive amphitheater and archeological museum.  Across the bridge from this historic city is the adjacent island of Ortygia.

This town is even older than Siracusa as it is the original settlement.  Between Siracusa and Ortygia there is so much to see in this area. When looking for accommodations, stay in Ortygia rather than Siracusa.

Wandering the narrow alleyways and hidden trattorias of this island town is like stepping back in history. Don’t be surprised when those alleyways suddenly open on spectacular plazas, brilliant fountains and ancient ruins.

At this point on the southern Italy road trip, all signs are pointing to Agrigento. Resist the temptation to head straight to Agrigento and make a detour to Villa Romana del Casale. This is an exceptionally well-preserved Roman villa.

Despite its name, the villa is more similar to a royal Roman palace. This UNESCO World Heritage Site is an amazing, well excavated archaeological complex with the best-preserved collection of Roman mosaics in existence.

Built in the 4th century AD, Villa Romana del Casale was severely damaged at various times in its history until it was finally abandoned in the 12th century after it was buried under a landslide. Excavations took place throughout the 20th century and the mosaics survived relatively intact.

Seeing these magnificent works of art is another one of those travel moments where you feel a connection to the past. It is an emotional experience to see such a high level of artistic achievement created 2000 years ago. Do not miss this!

You’ve seen pictures of the Greek ruins scattered throughout Agrigento’s temple complex on Sicily’s sunny southern coast. The Valley of Temples is the most recognizable temple with several graceful structures but the Tempio della Concordia is the most impressive. 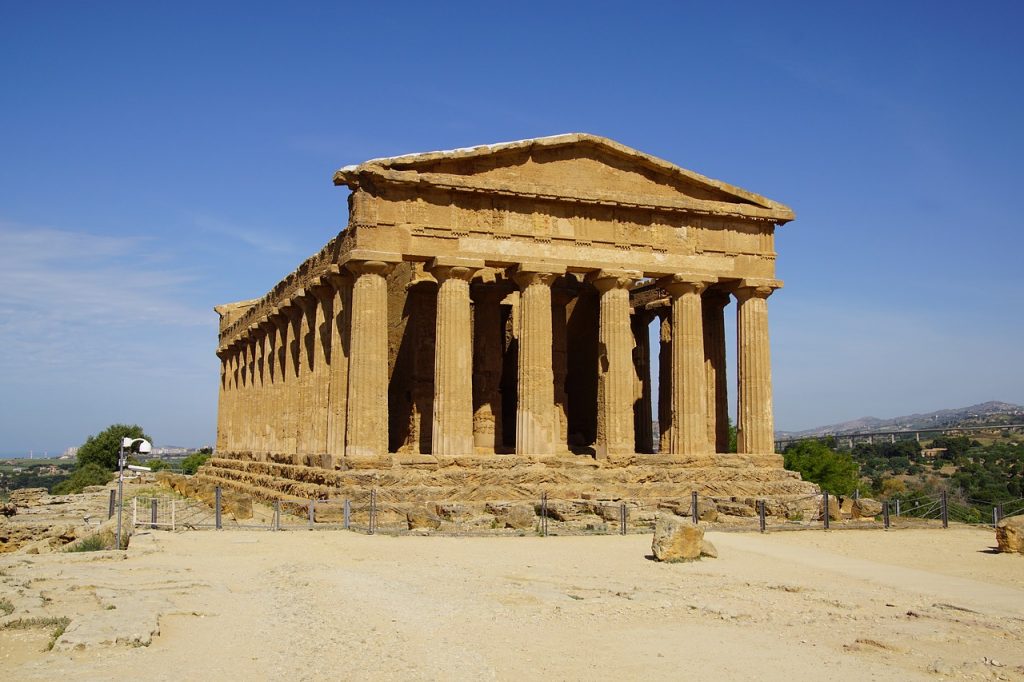 Here is a structure that was already centuries old when the Roman first explored the area and laid eyes it. In the Middle Ages, the temple fell into disrepair and was dismantled. The stones were used for housing by the local population. Still, even in this deteriorated state, it is possible to see these archaeological masterpieces and envision the grandeur of past ages.

Where to stay in Agrigento.

After savoring Sicily’s southern coast, a good next step is to head north straight for the jewel in Sicily’s crown, the capital city of Palermo and the nearly Monreale. Depending on the approach to Palermo, you could either visit Monreale on your way to or from Palermo or stay in Palermo and visit Monreale as a day trip offered by various tours. Monreale is only about eight kilometers southwest of Palermo and it is another can’t miss archeological wonderland. 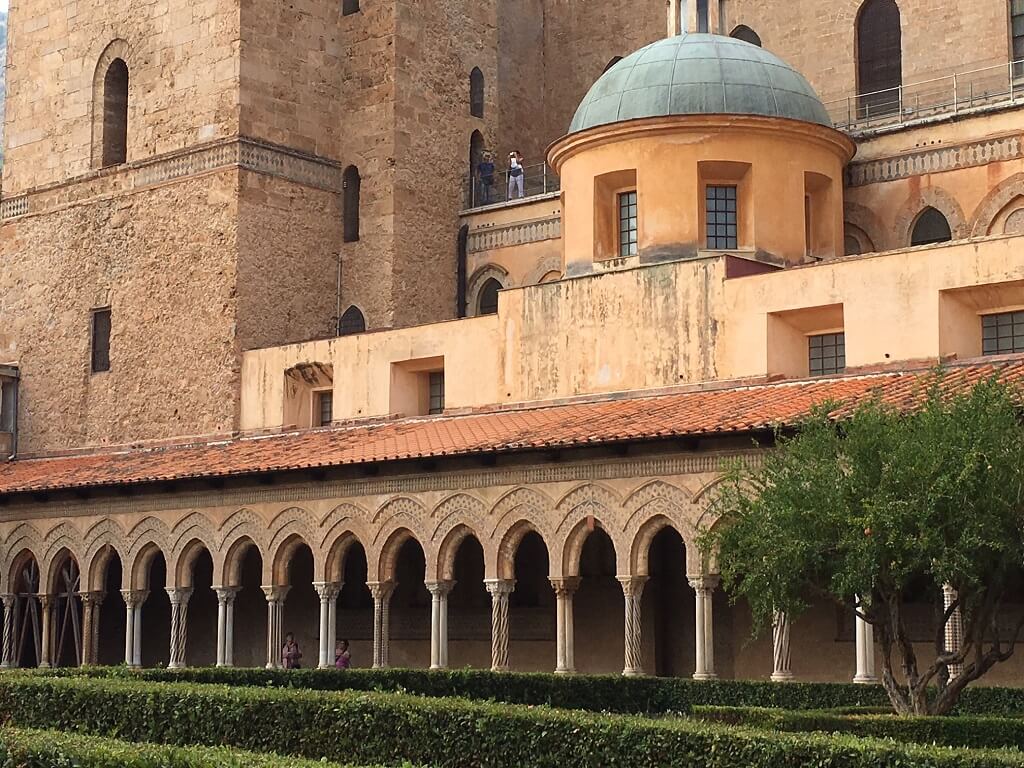 If you are into architecture and history, the cathedral of Monreale is the picture you will conjure up in your mind whenever you think about this southern Italy road trip. The cathedral and its accompanying cloisters area a unique mix of the cultures that once inhabited the area and left their mark. It dates to the 12th century and exhibits elements of Norman, Byzantine and Gothic styles.

I don’t know of any structures elsewhere that combine these styles. The effect is mesmerizing. Right outside the cathedral on a broad side street are a small collection of restaurants with exceptional food at reasonable prices.

It’s hard to describe Palermo. Winding streets suddenly lead into sun-splashed plazas with baroque fountains sprouting water from mythical creatures. Crumbling palazzos dating from the middle have been transformed into museums where you can browse stately homes of the past Sicilian nobility.

Street parties, food fairs, and festivals will suddenly erupt on Palermo’s many pedestrian streets. Palermo is a religious city with many saints’ feast days. You are likely to come across a religious procession straight out of The Godfather movie. The city’s Cathedral is another example of unusual and distinctive architecture.

Despite the cultural, architectural and historical marvels that Palermo offers,  the real attraction is in the city’s streets and markets. Sample the food in one of the many street food stalls throughout the city. The tasty snacks sell for as little as €1 – €2 and include seafood right off the trawlers, arancini, delicious fried rice balls and, of course, the ubiquitous pizza.

Food markets are a major Sicilian attraction. Ballaro Market is one of three major ones in town. It is worth a visit to experience a part of Sicilian daily life and to see some very strange looking vegetables.

Where to stay in Palermo, Italy.

Want more Sicily, here is a two-week itinerary sure to whet your appetite.

And if you’re looking to see other regions, here are some of the best places to visit in Italy.

A southern Italy road trip is a great opportunity to experience a great and ancient culture that has endured for thousands of years.

What part of this southern Italy road trip is YOUR favorite?