Taormina restaurants and attractions are around every corner in this ancient city, the gateway to Sicily.  It is a great place to absorb your first impressions of this culturally fascinating island.

Taormina attractions have been drawing visitors for centuries.  It is a gracious, inviting city packed to the brim with culture, natural beauty, and the mouthwatering cuisine that helped make Italian food world-renown.  I found Taormina restaurants to have some of the best food in Italy…and that’s really saying something!

It is well documented that the area around present day Taormina was inhabited by the Siculi, an Italic people, during the Iron Age. When the Greeks arrived in Sicily in the early 700s BCE, the Siculi still inhabited the area  around eastern Sicily

The Greeks remained in Sicily until after the Roman occupation while their culture continued dominant for centuries after.

By 241 BCE the Romans, now firmly in control of the entire island, had made all of Sicily the first Roman province. During the Roman era the island was a major grain supplier to Rome. Roman governors managed the island where they built splendid villas some of which can still be visited today.  Once such residence is the nearby Villa Romana del Casale, a beautifully preserved Roman palace and fine example of Roman mosaic artistry.

Once the Roman Empire fell entirely, the city was conquered successively by the Muslims who ruled until 1078, the Normans, regional Spanish crowns, and  France on 1675.

Taormina was part of the Two Kingdoms of Sicilies under the Bourbon dynasty until 1860.

In modern times Taormina has retained vestiges of each of the cultures that conquered it. Traces of Muslim, Norman, Roman and other cultures can be seen in the city’s ruins, architecture and art.

Taormina’s pleasant weather, culture and idyllic location on a hill overlooking the Ionian Sea has made it a modern day attractive destination. Prominent celebrities have visited the city and extolled its virtues far and wide making it an even more desirable destination. Among these are Oscar Wilde, Nicholas I of Russia and Friedrich Nietzsche (who wrote his Thus Spoke Zarathustra there).

This is a town with a romance and an environment that beckons and beguiles. It attracts the rich and famous as well as the curious backpacker.

Mt. Etna, is Sicily’s live volcano and one of the world’s most active. The volcanic soil is very fertile and supports the orchards and vineyards on the mountain slopes. In 2013 UNESCO declared Mt. Etna a World Heritage Site.

Corso Umberto is a major Taormina attraction. This main pedestrian street with medieval buildings on either side of the street, doesn’t even seem real. It feels more like what a pedestrianized Sicilian street would look like if Hollywood designed it. It’s too perfect; narrow little alleyways end in an ocean view, al fresco tables with checkered tablecloths sit underneath leafy vines dripping wisterias, cafes and cute boutique shops selling a wide variety of souvenirs and Sicilian specialties line the sidewalk. The street stretches about one kilometer from the old town gate of Porta Catania to the other, Porta Messina. It can take you a few minutes or an entire day to absorb the street’s charm.

Right in the center of Corso Umberto is the beautiful Piazza Aprile IX, or April 9th Square named after the date when Garibaldi began his conquest of Sicily to make it part of Italy and unify the entire country. Although just a beautiful plaza, it is one of Taormina’s principal attractions and meeting places.

The piazza boasts a spectacular view of the impossibly blue Ionian Sea and Mount Etna. This is an ideal spot to take a break in one of the laid-back cafes, savor a coffee and absorb the atmosphere.

The piazza is always lively with artists painting the views and musicians playing classic Italian songs in the shadow of the age old local church. At night the stores remain open and the crowd is just as lively. Spontaneous dancing breaks out and it is not unusual to hear the mellow notes of an aria from a popular opera drifting on the wind.

The Teatro Greco (Greek Theater) is the mother of all Taormina attractions.

This perfect horseshoe-shaped theater is sublimely situated high above the Ionian Sea with Mount Etna stoically situated in the background against the blue sky.

The theater was built in the 3rd century BC. The building materials, brick, is Roman but the design is mostly Greek. This leads experts to believe that it was originally built by the Greeks and rebuilt by the Romans on the original site.

In summer, the Teatro Greco is still used to stage all types of performances. Can you imagine?! A theater that is thousands of years old that was so perfectly designed and built that it is still in use today. I find that amazing.

The theater is the second largest theater in Sicily (after Syracuse) and the most spectacularly situated Greek theatre on Earth. You cannot miss this!

Insider tip: Make sure to visit early in the morning to avoid the crowds and get the best tourist-free photos. 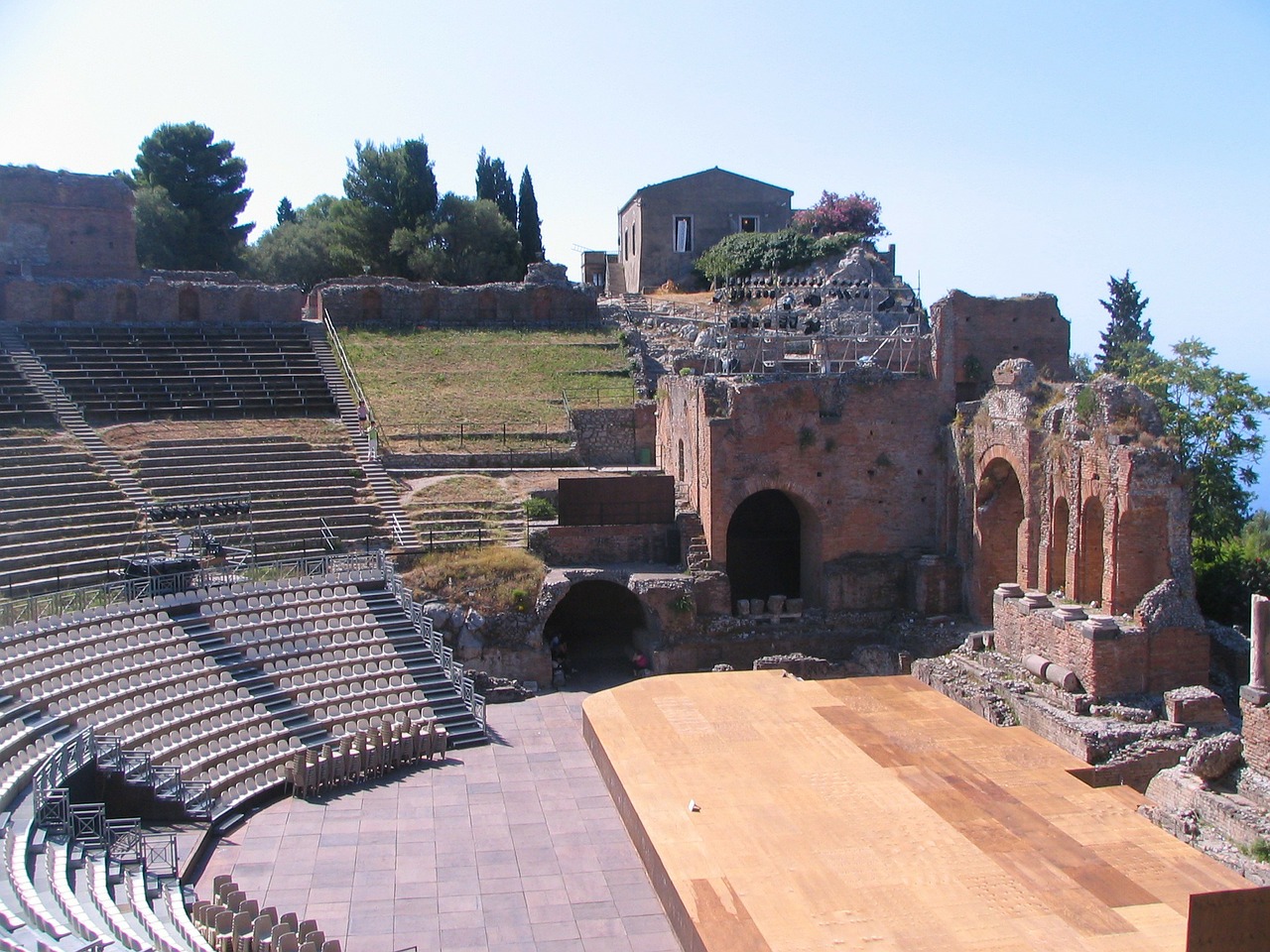 As the first city in Sicily coming from the Italilan boot, Taormina was also my first experience with real Sicilian food, a unique category of cuisine with strong flavors and a focus on seafood. Time and time again the typical Taormina restaurants just blew me away with their tastes and ambiance.

Just like the many cultures that occupied Sicily for the last two millennia, are reflected in the architecture, so too these cultures are represented in the local cuisine.  The local cuisine has much in common with Italian cuisine but it also has traces of Greek, Spanish, French and Arab influences.

Traditional Taormina cuisine specializes in seafood but all dishes are represented.

One of the top travel tips I always talk about is “always eat at least a few blocks away form the tourist areas.” Food in tourist areas tends to be below par and expensive.  The restauranteurs reckon tourists don’t know any better and they are unlikely to return so there is very little risk in displeasing a tourist.  In the case of eating around Corso Umberto, Taormina’s main drag, I have to make an exception.  We tried Terrazza Angelo, in the heart of Corso Umberto and were pleasantly surprised.  We went for the spectacular view and ended up loving the food.  Highly recommended.

In Italy, they add work and life on to food and wine. - Robin Leach Click To Tweet

Just a note if you are going to rent a car in Italy.  Make sure it is a compact one to easily fit through the narrow streets that were never meant for automobiles.

At the very tip of the Italian boot in Reggio Calabria is the town of Villa San Giovanni. Here is where you take the car ferry to Messina in Sicily. The car ferry takes 30 minutes and costs about €35. The crossing itself is smooth sailing. Actually getting the car onto the ferry is another story. You have to drive the car through these narrow and steep up-hill ramps and sharp corners; like an obstacle course. It takes longer to stow the car than it does to sail to Sicily, so make sure your car is suited for the Italian streets and ferry.

Driving in Italy can be a challenge for other reasons too. Once when we were looking for our hotel we diligently followed the traffic signs but continued to go around in a circle. After the fourth try, we found a policeman and asked for directions. Just as had happened in other parts of Italy, the policeman directed us to go against the traffic.  A “piccola infrazione” (small infraction) he called it. “Otherwise you’ll just go around in circles”, he said. I wanted to ask if it wouldn’t be easier to just change the sign but decided against it.

From the food to the archaeology to the winding streets to the medieval town, Taormina attractions and restaurants will delight you.

Make sure to check out these reference materials to have a good grasp on the area before you visit.

What Taormina restaurants and attractions are your favorites? Would you feel comfortable driving in Italy?  What car would you rent? et us know in the comments.