An Old Havana self guided walking tour – with a map – is the best way to see Havana, the capital of Cuba. The far eastern section of the city known as Habana Vieja or Old Havana is especially charming with its colonial architecture and bustling plazas. 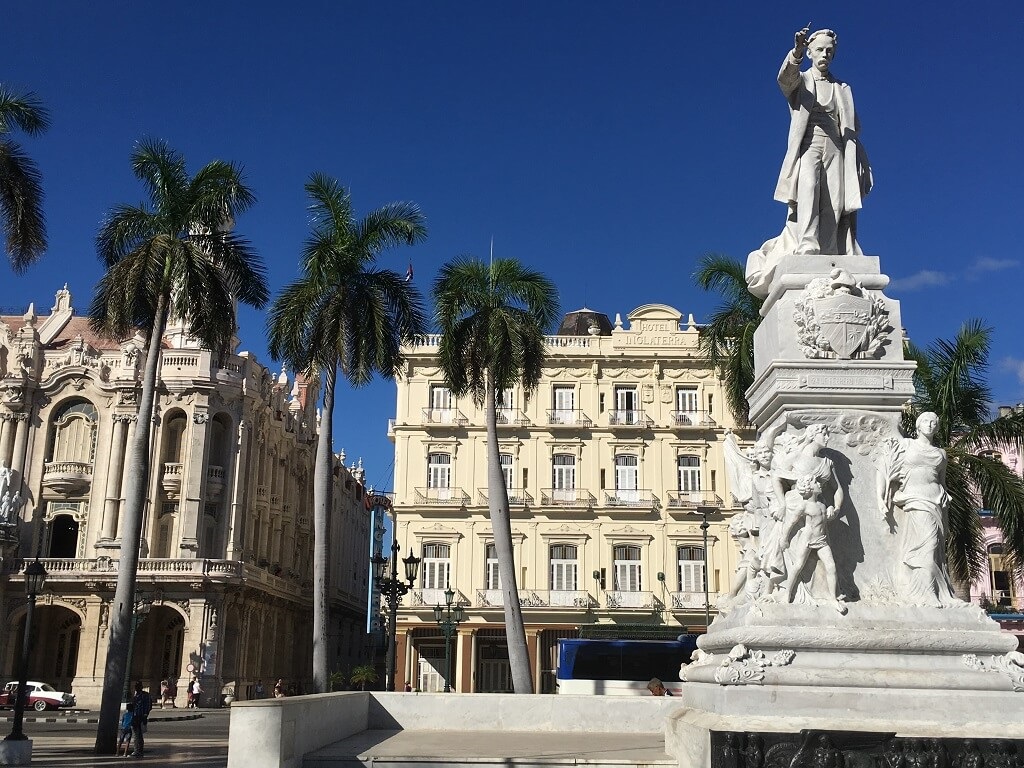 Havana beguiles. It draws you in slowly with every soulful, mellow musical note, with every piece of baroque architecture, with every leafy, sunny square.

Here is a self-guided Old Havana walking tour map that will ensure you hit many of the main points of interest. There is so much more to see and do in this city but if your time is limited, this Old Havana self guided walking tour is for you.

Start at El Capitolio, the capitol building, on Paseo del Prado which looks similar to the one in Washington DC. As impressive as the outside appears with its landscaped gardens and massive steps, the inside is equally impressive. El Capitolio houses the third largest indoor statue in the world, the female representation of the Republic of Cuba. Also noteworthy are the art nouveau halls and chambers with their gilded lamps and polished marble floors. The building has been restored to once again house the government of Cuba.

From El Capitolio, turn left and head towards the Gran Teatro de La Habana Alicia Alonso. This ornately decorated, blindingly white, beautiful theater has been described with adjectives such as magical, magnificent and stunning…both inside and out. This is Havana’s performing arts center and home to Cuba’s internationally renowned National Ballet Company. It is named after Alicia Alonso, Cuba’s prima ballerina and founder of the National Ballet Company.

In Cuba and specifically in Havana there's a sort of energy that turns every situation into something unexpected. Fernando Perez Click To Tweet

The artists that have performed here over the years read like a who’s who list of artistic luminaries: Enrico Caruso, Jinny Lind, Sarah Bernhard, Alicia Alonso, Anna Pavlova to mention a few. Several theaters have stood in this location from the 1830s to the present. The current structure was built in the early 1900s and was renovated several times. It reopened in 2016 and now offers excellent tours for $5USD. 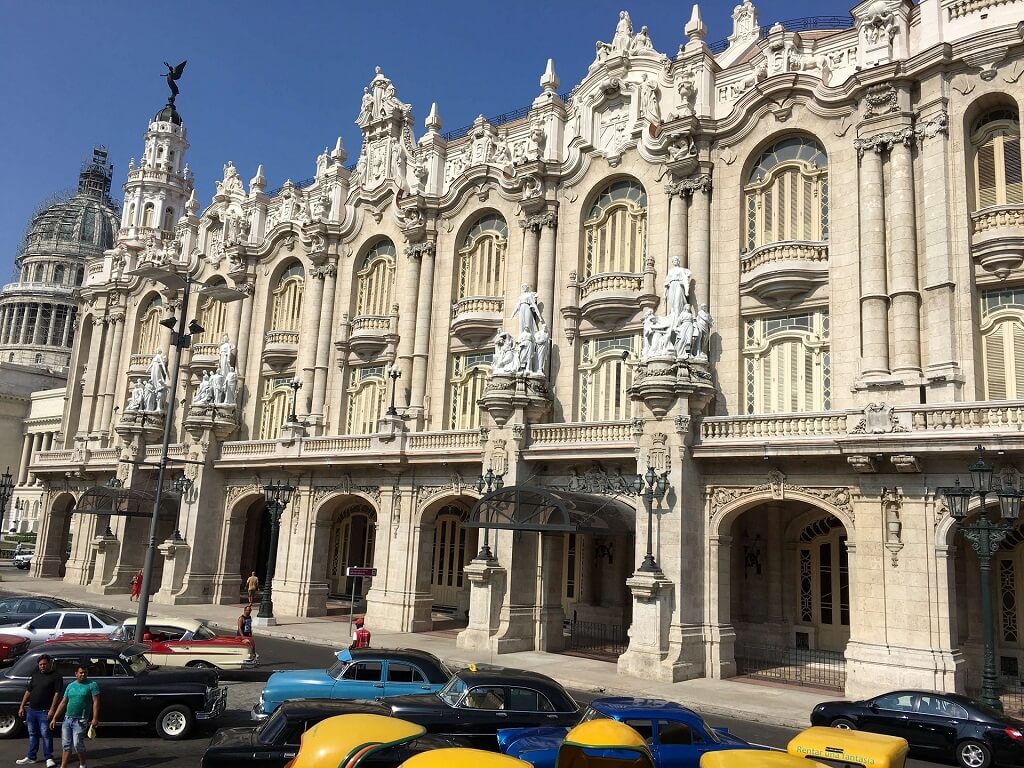 This leafy plaza with its statue of Cuban patriot, Jose Marti has been completely restored. Have a rest on the stone benches and watch the classic American cars parade by. Or better still, hire one to tour Havana for an hour or two at about $35UDS an hour.

Cross Parque Central heading east and you find yourself at Plaza Albear. On your left is El Floridita, the world famous bar where Ernest Hemingway sipped his daiquiris daily. In fact, many believe the classic Cuban cocktail was invented in El Floridita. Instead, it was invented on the far eastern side of the country in Santiago de Cuba province. Plaza Albear is also the entrance to Obispo Street, a bustling, pedestrianized street full of shops, parks, restaurants and currency exchange houses, called CADECAS. Take Obispo Street all the way to where it empties out into Plaza de Armas, one of the most beautiful squares in Havana.

To learn about CADECAS and Cuba’s unique double currency system, check out 10 Do’s and Don’ts for your visit to Cuba.

Plaza de Armas is the site of the founding of Havana in 1519. The Plaza was originally called Plaza de Iglesias, or Church Square in honor of a church that stood here until 1741. Today it is one of the most interesting sites in Havana. In the center is Cepedes Park named after Cuban patriot, Carlos Manuel de Cespedes who liberated his slaves and initiated the first Cuban war of independence against Spain. The square is surrounded by a colonial military fortress on the left, the Museum of Natural History on the right and the Museum of the City of Havana at the entrance. 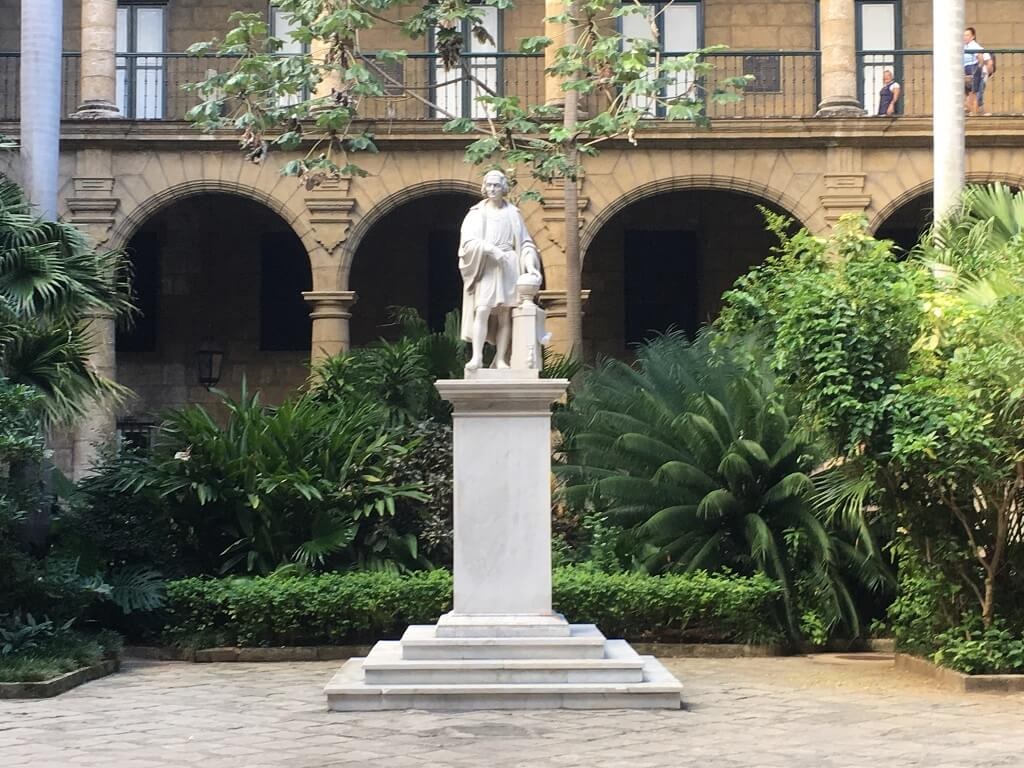 If you’re short on time and can only choose one museum to visit, definitely head for the museum of the City of Havana with its excellent collection of colonial artefacts. It also features a detailed history of the founding and development of Havana. The building is a faithfully restored representation of what an upper class colonial home would have looked like in colonial times.

Leave the plaza heading south on Oficios Street for four blocks and you will walk right into Plaza de San Francisco. Just as you enter the plaza, there is a currency exchange house or CADECA on the left. This wide, cobblestone square is one of four plazas originally built in the early 1700s. The others are Plaza Vieja, or Old Plaza and Plaza de La Catedral or Cathedral Square. At its center looms the austere Church of San Francisco, originally connected to a convent. Next to it sits a beautiful fountain made of pure white Carrera marble. The entire plaza creates such a pleasing impression that it is frequently used as a backdrop for weddings and sweet 15 photo shoots.

The plaza is surrounded by many high-end boutique hotels and restaurants. There is also a high concentration of art galleries in this area. To the east of the church in a shady little garden sits the elaborately decorated Greek Orthodox church of Havana.

Cuba is such a beautiful country, and everywhere you go, there's music and people dancing - especially in Havana. Julia Sawalha Click To Tweet

Off the plaza on Amargura Street is the exposed section of the original colonial aqueduct, said to be the oldest in the Americas. Across the street from the aqueduct is the convent of Saint Brigida which today serves as a mid-range hotel run by nuns. See what it’s like to lodge in a modern-day convent in Havana.

Continue south on Oficios Street for one block,  make a left on Teniente Rey Street and you will be in Plaza Vieja. Plaza Vieja is where both locals and tourists go to sit in cafes and have snacks, sip drinks or coffee and listen to live music. On every side of the plaza are little cafes and restaurants with resident musicians. The recently restored plaza is wide, cobblestoned and features interesting and unusual works of art throughout. This is also where you can visit the local brewery serving particularly good beer. Plaza Vieja is the perfect spot for a quick drink, snack or a leisurely meal. It is also ideal for people watching before continuing on your Old Havana walking tour.

From here head north, the opposite direction from where you came, on Mercaderes Street, one of the liveliest and most interesting streets in Havana. Check out the open air restaurants on either side of the street, the little shops, parks and quirky museums. One particularly good paladar, or private enterprise restaurant, on this street is Paladar Mercaderes, a second floor location with authentic Cuban food at reasonable prices. Try to get a balcony street so you can watch the action on the streets below as you savor your mojito and prepare for the next stop on your walking tour of Old Havana.

Mercaderes Street opens up to Plaza de La Catedral, the last of the four classic colonial plazas. The first thing you notice is the majestic baroque style cathedral completed in 1777. Surrounding the cathedral are well-preserved 18th century homes with graceful arches, many of which have been transformed into restaurants. Looking at this colonial masterpiece of a plaza it’s hard to believe it was originally a swamp. 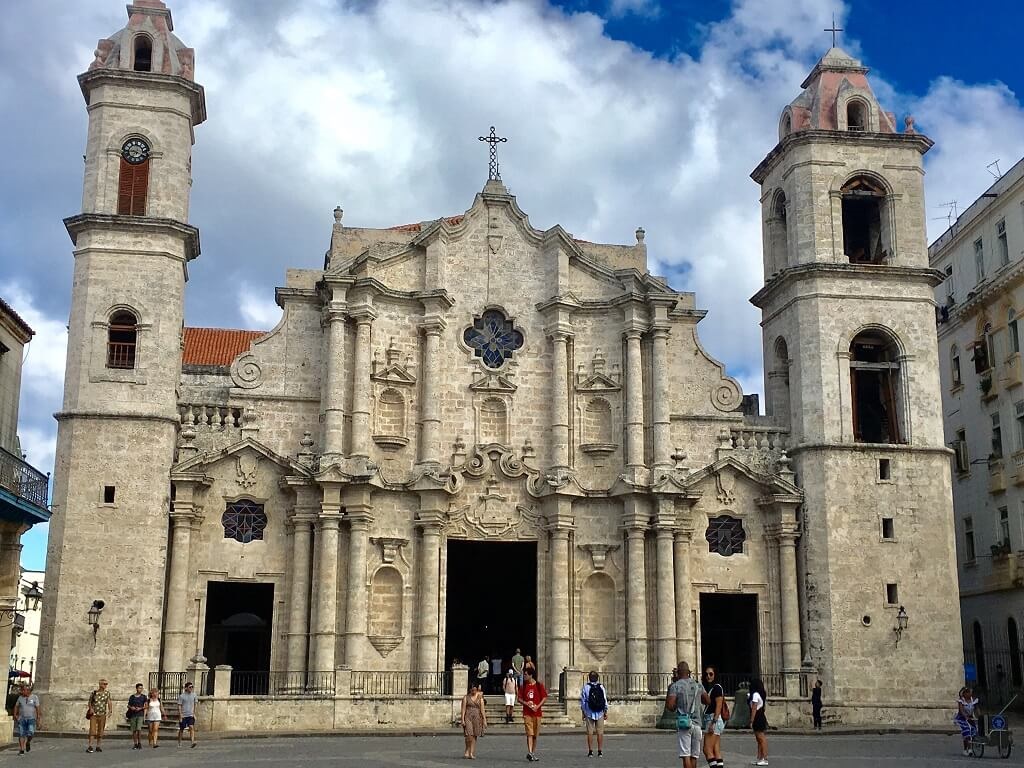 Right off Cathedral Square down a little side street called Callejon del Chorro is the private enterprise paladar, Dona Eutemia. This is a pleasant restaurant with authentic Cuban fare with indoor and outdoor seating. It’s a great place for lunch or dinner but be sure to reserve before hand or you might not get a table.

To the west of the cathedral on Empedrado Street is La Bodeguita del Medio bar, another one of Ernest Hemingway’s hangouts. Patrons write their names on the wall here and savor the mojito cocktails that Hemingway made famous. It’s all a bit touristy and the mojitos are about twice the price they’ll cost elsewhere but it’s still fun.

As you head back to the original point of departure, Central Park, you can stay on Empedrado Street but any street will provide you a interesting view of day-to-day Havana. O’Reilley Street is the busiest street filled with restaurants, snack bars and shops. Continue west until you reach a large complex housing the new Hotel, Gran Manzana de Kempinski which takes up the entire block. This is a new hotel reputed to be the most expensive on the island or at least the most luxurious. Be sure to visit the lobby to admire the design and head up to the top floor to visit the infinity pool. From this vantage point you will appreciate stunning views of Havana and the surrounding area.

At this point you have completed your Old Havana self guided walking tour. You should be back at Parque Central in the center of Havana’s classic collection of hotels. Be sure to admire the architecture of these hotels such as Hotel Inglaterra, Saratoga, Plaza, Iberostar Parque Central and others. You will notice an eclectic mixture of architectural styles; art deco, faux baroque and modern.

There are dozens of ways to explore this exciting and unique city. Havana grows on you the more you experience it, the more you discover  Havana’s hidden charms. This is just one Old Havana self guided walking tour. The city can be explored with all types of Cuban transportation; bici-taxis, coco-taxis or classic American cars. But the best way is still on foot. And for some of the best Cuban food in town, check out these unique Havana restaurants.

If you have more time, don’t miss the opportunity to explore the rest of this enchanting island with the perfect Cuba itinerary.  You can save money on accommodations by booking Cuban casas particulares through Homestay.com.

Come well prepared with useful information to immerse yourself in Cuban culture. My book, “Don’t Just Travel to Cuba, Experience Cuba. The Ultimate Cuba Travel Guide,” will be a handy companion on your trip.

Which part of Havana would you most want to visit? What would you add to the Old Havana self-guided walking tour?