I always wanted to go on a Strait of Magellan cruise, but after reading “Over the Edge of the World” by Laurence Bergreen, I became obsessed with these mythical places. The book tells the riveting story of Ferdinand Magellan’s 43,000-mile (69,800 kilometers) circumnavigation of the earth as he searched for the riches of the Spice Islands.

Magellan’s voyage was incredibly dangerous. Only 1 ship out of the original 5 returned and only 18 sailors from the original 270 lived to tell the tale. Who would have signed up for this voyage if they had known they only had a 6.6% chance of survival. Along the way, the voyage suffered several mutinies, hurricanes, hunger, unfriendly natives and more. Magellan himself was killed by natives in the Philippines as he tried to “convert” them to Christianity. 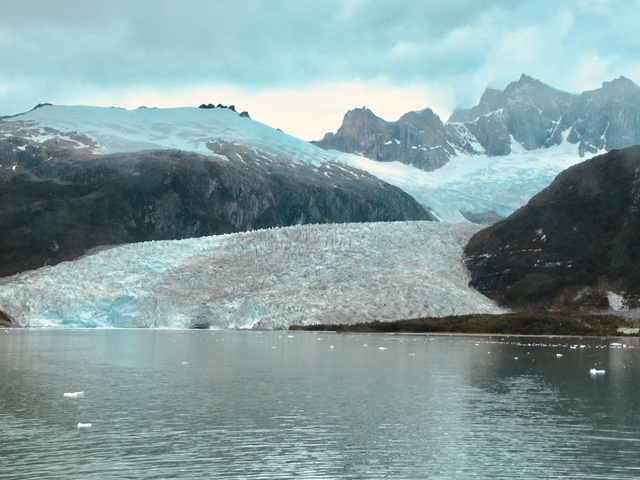 The book also describes the stunning natural beauty of the area. The flora, fauna and native populations were meticulously recorded by the ship’s chronicler, the Italian Antonio Pigafetta, one of the few who survived the voyage. I wanted to see what these sailors saw and to imagine what it was like to sail the turbulent waters of the Strait of Magellan in their wooden 16th Century ships.  Be careful what you wish for.

HOW TO GO ON A STRAIT OF MAGELLAN CRUISE

The starting point for those wanting to experience a Strait of Magellan cruise is the town of Punta Arenas. Punta Arenas, in southern Chile, is an unlikely mixture of faded European gilded-age splendor, wild-western U.S.  frontier town, immigrant melting pot, and modern-day adventure expedition kick-off point. The town was once a mandatory stop-off point for ships traveling to and from the Pacific and Atlantic oceans. Ships docked to load and unload cargo and passengers, and the town prospered.

In 1914 the opening of the Panama Canal cut transit time between the oceans by 8,000 miles, and Punta Arena’s fortunes declined. Nevertheless, there are still many traces of past grandeur evident in the city’s buildings, parks, and cemeteries. The local cemetery is an especially interesting repository of Punta Arena history. It has been ranked as one of the most beautiful cemeteries in the world. In 2012 this delicately landscaped necropolis was designated a National Monument of Chile.

The official name of the local cemetery is the Cementerio Municipal de Punta Arenas Sara Braun. Sara Braun, who donated the land for the cemetery, was a Latvian immigrant who traveled to Punta Arenas in the early 1900s. She eventually became the richest woman in Patagonia through shrewd investments and advantageous marriages.

Apparently, Ms. Braun was as eccentric as she was rich because before her death she dictated that the main doors of the cemetery be locked forever. To this day the only entrance to the cemetery is through the side door. Another legend has it that a native Indian’s tomb produces miracles. The tomb is constantly covered in flowers and coins donated by local inhabitants in gratitude for the Indian’s miraculous interventions.

Many travelers come to Punta Arenas to board a  Strait of Magellan cruise. The ships also traverse the turbulent waters of the Beagle Channel and other waterways of Tierra del Fuego.  It was in this little town of eclectic architecture and improbable legends that we boarded the Ventus Australis for a 4-night Strait of Magellan cruise, the same waterways explored by Ferdinand Magellan as he circumnavigated the globe and Charles Darwin as he researched the region on his ship, The Beagle.

Australis is an expedition cruise company with a focus on exploring the area of Patagonia and Tierra del Fuego commonly referred to as the “end of the world.” These are the unspoiled channels and waterways at the very tip of the South American continent.

The ship caters to smaller groups, 200 is the maximum number of passengers. It sails between Punta Arenas, Chile and Ushuaia, Argentina, the “town at the end of the world.” The ship’s accommodations are ample and comfortable. The meals tasty and varied. But the real highlights are the shore excursions.

All shore excursions require passengers to suit up in safety gear and listen to a safety and sustainability talk to ensure we leave nothing but footprints in the pristine environment. Passengers take off on Zodiacs and are taken to several stops on the itinerary. One of the stops is a colony of Magellan Penguins you can only view from the Zodiacs in order not to disturb the colony. If you are lucky, your Zodiac will be accompanied by dolphins swimming alongside you as you speed over the frigid waters.

The first Strait of Magellan cruise excursion takes place in a primeval forest with lush foliage that has been in the area for millennia.

Along the way, you sail through the stretch of the Beagle Channel known as Glacier Alley with towering glaciers on both sides. This area forms part of the Chilean Fjords in southern Patagonia. It’s fascinating to see the massive glaciers tumbling to the edge of the water.  This entire region is famous for its glaciers, among them the majestic Perito Moreno Glacier in the adjacent country of Argentina.

One of the highlights on our Strait of Magellan cruise would have to be a shore excursion to the majestic Pia Glacier. Passengers can hike around the Pia Glacier area right at the base of the glacier. Want to feel tiny and insignificant amidst the spectacular grandeur of earth’s natural marvels?  Then stand next to a glacier and look up.

The captain warned on several occasions that although the ship was not built to sail in ocean waters, we would have to sail on the ocean for a short time and that the waters would be turbulent.  Up until then, we had felt barely a ripple on the ship. The night we ventured into the ocean near Cape Horn the ship tossed and lurched to the point that one had to hold on to railings in order to stabilize. The waters were so turbulent that we were not allowed to disembark on Cape Horn. However, we were able to navigate around this landmark.

I could not help but imagine how if we, in our modern sturdy ship with a professional crew, were lurching in the turbulent waters how it must have been for the crews of the early explorers on the Magellan ship.

Would you like to go on a Strait of Magellan cruise?  Let us know your thoughts.